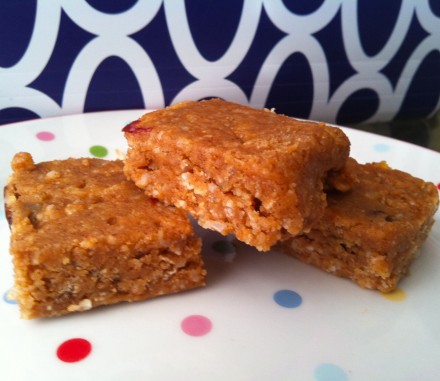 Well, it is an understatement to say that I have completely slacked off on writing in this blog. It’s been busy! I think I stopped writing right before the holidays. Then came the busy spring … and the busy summer … and now it’s September. It’s not technically fall, but I’ve already busted out the pumpkin spice coffee and our apartment is saturated with cinnamon scents. I have no shame. Halloween stuff is coming out as soon as I can get away with it.
Ben and I got engaged over the Labor Day weekend, and I spent the week after sick with a cold and gorging on not-so-healthy foods. But it’s pretty important that I get back on the working out and eating healthy bandwagon. There is a dress involved now. That’s a game-changer.However, I can’t stick with any plan unless the foods I’m eating are convenient and taste good to me — and that’s where things like these “power chews” come in.
I am obsessed with the almond and peanut butter power chews that are sold in the bulk bins at Fresh Market. They are small, but surprisingly filling and tasty. Unfortunately, they are also very expensive — I’ve paid $6 for a pretty small tub of them. I’m not hating on Fresh Market — I’m just saying that with birthdays and holidays and a wedding looming in the distance, I need to find ways to be thrifty.
These bars were inspired by a recipe at this blog, but I made some major modifications. And you can, too: If you want to go straight paleo, almond flour could be used instead of the rice cereal. Allergic to gluten? Apparently Kellogg’s has started making gluten-free Rice Krispies (note: original Rice Krispies are NOT gluten-free). Finally, sugar-free substitutes could be used instead of the honey. I’m also toying with an idea of making these with peanut butter.
Almond Butter Power Bars

2 tbsp milk (any type would work)

*Costco, or other wholesale clubs, are your friends for these ingredients

Here are the easy steps:

-Grind the coconut and 1 cup of the rice cereal in a blender or food processor.  Add the coconut to a bowl, but don’t add the ground cereal just yet.
-Add the honey, oil, salt, cinnamon, and almond butter, and stir together with a spoon (I prefer a silicone spatula)
-Blend in the ground rice cereal, and fold in the non-ground cereal and the cherries until the mixture becomes thick.
-Flatten the mixture into a small dish (mine was a 9″ rectangular dish) lined with parchment paper,  and cover with foil.
-Stick the pan in the fridge or freezer, and be patient while you wait for your snacks to become firm.
That’s it! Now you have an easy snack or breakfast. Just try not to eat the whole pan in one sitting. I know I could if I wanted to …