As for me and my friends, one of our goals was to have a proper tea party. We’d thrown around different ideas, ranging from fall-themed to Wimbledon. Finally, the tennis theme won, which was pioneered by my friend Susie. Susie, Lupe (who I know I have mentioned before), and I finally got around to having our tea party a few months ago, back in July. I decided to write about it now, since it’s definitely one of my favorite memories of the year, and I have a pretty brilliant (if I do say so myself) scone recipe to share. 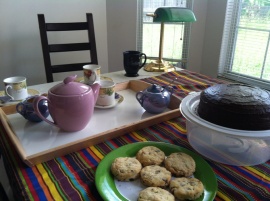 Can you think of a better way to spend an afternoon? I can’t.

Our tea party spread was pretty simple: chocolate cake with cream that Susie made, pretty teacups, and chocolate chip scones. Oh, and, most importantly, the tea. Pretty fascinator-style headbands and dresses were involved. Have you ever visited a food-truck bazaar in a full-on tea party ensemble? I recommend it. There’s nothing like having some chicken and waffles while wearing a flower on your head.

And there might have been copious amounts of vodka involved with our tea party, but we won’t speak of that, since we are proper ladies.  Besides, the Doctor was invited to the party. Screwdrivers were in order. 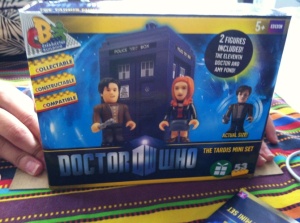 We settled in to watch Federer (whom my sister and I affectionately refer to as Fer Der Der) win yet another tennis match, sipped tea, and enjoyed Skyping with our special guests — Ashley, Minerva, and Minerva’s daughter Sanibel (who graciously provided the cute factor for the afternoon).

I’d actually been meaning to make scones for quite some time (as you get to know me, you will learn that the phrase “I’ve been meaning to do that for some time” is something I say really often), but wanted a really simple recipe.  As it turns out, scones aren’t that complicated.

This recipe was adapted from an English Royalty Scone recipe I found. The dough is really tricky, and you’ll need two oranges on hand (the original 3 tbsp just doesn’t cut it, in my opinion). Lemon might also work, but there’s just something about orange and chocolate together, isn’t there? It’s almost as good as spending an afternoon with good friends. Almost. 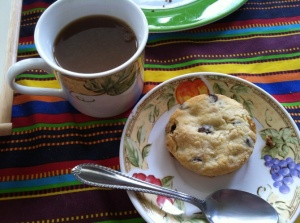 In a large mixing bowl, combine flour, sugar, baking powder and salt. Cut the cubes of butter into the flour mixture using a pastry cutter (I just used a fork, and you can too if you don’t have one). Mix in chocolate chips, making sure to incorporate them evenly. Add orange zest (this step is optional, but I enjoy using citrus zest in baking. It’s tasty). Then, gradually add the orange juice until it forms a dough.

Roll or shape the dough into a round, approx. 8-9 inches. Use a biscuit cutter or a round glass (I used a Captain Kirk Star Trek glass, if you must know) to form the scones until you’ve used all the dough.

Place scones on a greased cookie sheet, and bake at 400 F for about 10-12 minutes, until golden.

I found that I got about 8 scones out of this, which isn’t much, but you could always double the recipe if need be. It’s a perfect quick breakfast or brunch to share with a few of your friends. 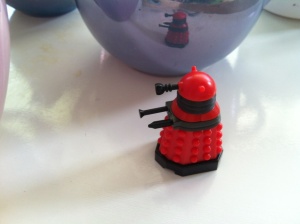 Or maybe even your enemies.