This has been a great year so far, and I can’t believe it’s coming to an end. Labor Day, of course, marks the beginning of fall and the holiday season. Here in Florida, it means we’re in prime hurricane season, and that mild weather season (as opposed to our other season, “hot weather season”) might actually start in a couple months. Stores ignore the fact that we’re in Florida, so I fully anticipate seeing sweaters and Santa Claus in stock soon.

Most importantly, the Pumpkin Spice Latte at Starbucks has returned, and I might even consider wearing closed-toe shoes at some point. Mmm … coffee. And shoes. Coffee and shoes. Here I am, getting sidetracked again.

Anyway, this Labor Day weekend, a good friend of mine, Ashley, came down to visit from South Boston, Virginia. I haven’t traveled up there to visit her yet, but I promised her that I would soon. (Honestly, I’m a little afraid. The closest Target store is two hours away.)

I’m always excited when I have a friend come to visit, since I’ll get to entertain them the best way I know how — through drinks and baked goods. By the magnitude of baked goods prepared and consumed this weekend, you’d think we were storing up for the winter. And perhaps we are.

The night before Ashley’s arrival, my boyfriend, Ben, and I kicked off the carb-filled weekend with some crockpot Thai peanut noodles (which will probably get their own post one day), and amazing “Neapolitan Cupcakes.” Who knew brownie mix and cake mix could combine so well?

Ladies, find yourself a man who can bake. At least, one who knows that everything’s better in a muffin tin.

There’s a fancier recipe for these online, but Ben just used Ghiardelli brownie mix and strawberry cake mix. You prepare each mix according to box instructions, and layer the cake batter over the brownie batter in muffin tins. Topped with vanilla frosting, they were fantastic. I wish I had another one right now, actually.

The following morning, I rose from my carbohydrate-induced coma, had a little bit of Mom’s banana bread (also deserving of its own post) and headed down to MCO to pick Ashley up. On the way back toward Oviedo, we pondered over what we should do before having dinner and drinks with friends later that night. Eventually we decided to go shopping in Heathrow until Erin was set free for her lunch break. World Market, our first stop, is one of those stores that I’m completely amazed by every time I go in. I always wonder, “Why don’t I shop here more often? Why don’t I buy all the things? Why don’t I live inside this store?” There’s tons of food, wine, and beer. And you know how I feel about those things. Within an hour of Ashley’s arrival, we’d already acquired an assortment of beers, coffee, and chipotle chocolate. Success.

After meeting Erin and refueling with Thai food (delicious lettuce wraps! Noodles!), we made the voyage back to Oviedo, where it was decreed that it was pool party time until dinner.

Honestly, this was the gist of our “pool party.”

Dinner was at Oblivion Taproom, which is a fantastic gastropub here in Orlando. I wish I’d taken photos of some of the things we ordered, but I seem to not be grasping the concept of how blogging requires constant photo-taking. Still, the beer selection and burgers there are absolutely delicious, and I think everyone had a good time. Well, I know I did. Pretzel burger (served with tater tots and delicious cheese sauce) and beers? Come on.

But the main reason for this post is what we consumed on Saturday night, our designated girls’ night. The cake to end all cakes. Cookies, inside a cake. Was it cookieception? YOU DECIDE.

Pinterest is notorious for featuring recipes pertaining to “things baked inside other things.” I’d kind of shied away from such things, afraid that it would be overkill. Ha. Overkill? Apparently when it comes to baking, there’s no such thing. 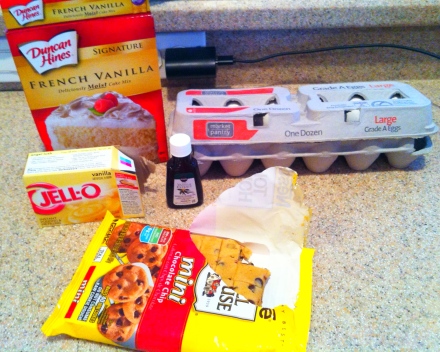 Mix the French Vanilla cake batter per package instructions, adding the vanilla pudding mix and 1 tsp of vanilla. What you come up with is a very sweet cake batter that smells delicious.

Too bad you can’t smell deliciousness over the Internet. One day, I’m sure.

Like I mentioned, I took a few shortcuts with this cake. I didn’t have a whole lot of time, so I bought break-and-bake mini Toll House cookies to stick inside my cake batter. I spaced them out evenly in each cake pan (we’re making a double-layer cake, here), and baked them according to the cake mix instructions, checking on them occasionally. What you end up with kind of looks like two giant cookies. 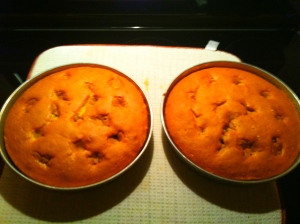 After the cake layers have cooled, you can frost as usual. I used vanilla frosting, but I bet you could use chocolate if you’re REALLY into living on the edge. I sprinkled some chocolate chips on top, and decorated the cake’s surface with the mini-cookies.

And there you have it — Cake/cookieception. Leonardo DiCaprio would be proud. Is it healthy? Nope. Does it pair well with wine? Not really, sadly. But it’s the perfect cake to look forward to with a cup of coffee the following morning. The cookies actually take on a moist cake-like consistency, but the entire cake went stale after a couple days.

Honestly, I think I’ve reached my baking quota for a while. Maybe I’ll venture into actual cooking, or some arts and crafts next time. That’s a lie. I made peanut butter cookies the other night. I might need a baking intervention.

I’ll leave you all with a shameless plug: For something entirely different than the shenanigans here at Drinkterest, check out my friend Lupe’s blog. It’s full of delicious Mexican food and general awesomeness. And tell her to open a food truck. She’ll cook, I’ll make mini-pies, and together we will rule the world.